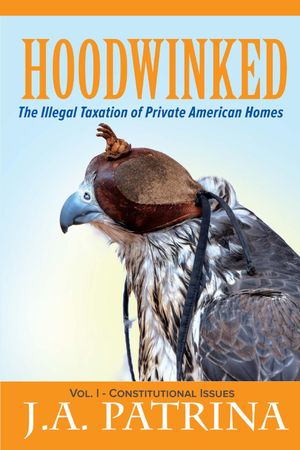 At heart, American private property is supposed to be sacrosanct.  “What’s mine is actually mine – not up for grabs”.

To affirm property, the Constitution authorizes legislatures alone to levy taxes but only so long as they are tied to transactional events such as sales, income, capital gains and tolls … not to property.  After paying these, what’s left is yours, your home, your castle.

But is it yours, when under the threat of confiscation, municipalities extort monies from you each year? Certainly, this is not owning property “free and clear” as the Founders intended.  We were Hoodwinked.

Currently, socialist voices are looking to go beyond home taxation, advocating taxation on any kind of property – even financial wealth.  This metastasis needs to be arrested by SCOTUS, full stop.  Hoodwinked I presents the Constitutional framework for achieving a vivid demarcation line.  Below, the topic’s “primer”. 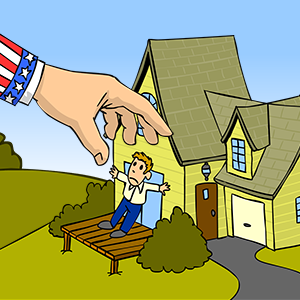 Municipalities are just regular corporations. And like McDonald’s Hamburgers Inc., they were never granted taxation or taking authority.

Instead, the U.S. Constitution’s “Origination Clause” specifies that taxes-in- any-form need to originate in the legislature – taxing authority cannot be delegated to local budget voting.

The property tax phenomenon, which evolved in earnest after the Civil War, blossoming in recent decades through billowing government school budgets, has never been challenged. As things stand, the U.S. Constitution was never amended to classify private homes taxable, permitting open-ended extortion by municipalities. Such an amendment would repudiate the whole “We the People” foundation, placing us and our property below the government.

Instead, to circumvent this conundrum, and without a court battle being waged over legal standing, State Legislatures invented tax lien/ confiscation extortion devices which simply ignore Constitutional protections of private property, and force unilateral obligations onto citizens to pay any amount demanded.

What money is actually owed?

Other than local road usage and police, residents do not implicitly contract for town corporate services, nor do homeowners owe “residency” rents for property they already own, nor do homeowners earn “taxable income” on their dormant homes.  So, what gives?

The founders set up a system to prevent all of this corruption, but somehow, the worst violators of the U.S. Constitution became the States, who now seem a wall separating common citizens from their U.S. Constitutional protections.

State home taxation habits and local tax collectors, therefore, must be confronted at the U.S. Constitution level, as home taxation wantonly tramples our natural rights to life, liberty and property – the bedrock of American law.

And recall, our rights to life, liberty and property sit inalienable— neither able to be given away nor taken from us by any operation of government, including by enacting new statutory laws.  In defiance of these absolute rights, home taxation side steps legislative authority, ignores contract law, and abandons due process altogether, the firewall protecting against government overreach.    Home taxation represents a subjugation of originalist American liberty by socialist interests.

So, to be Constitutional, social mandates—like free K-to-12 education—must be funded via legislatively-approved, state-wide, transactional-based taxes, with pooled monies pro-rated down to all towns, reflecting equal protection across all student head counts.

In detail, the author’s Hoodwinked I, II & III book series examines property rights from biblical times to today and calls upon U.S. Constitutional law to reverse home taxation, pushing mandate, funding and equal protection responsibilities back up to the state legislatures where they belong.

And though you may say pushback on home taxation amounts to tilting at windmills, I invite you to more deeply explore these pivotal Constitutional issues, at Hoodwinked.net.

Next, the question becomes: What is to be done?

First, realize that based upon the language of the relevant U.S. Constitutional clauses, municipal taxation operates unlawfully at every turn. Neither assessment-based property taxes - propped up by town voting - nor non-judicial tax collection “taking” practices stand under the U.S. Constitution.  These practices cannot be “tweaked”; they need to end.

In Connecticut, for example, free K-to-12 education is settled law, incorporated within the Connecticut constitution back in 1965.  Free K-to-12 is fine, but how it is currently paid for is unlawful.  Rather than homes, funding needs to occur through state-level sales and income taxes - originated within the state legislature and pro-rated down to the municipalities in equally protected allotments per student, used not just for government schools but at one’s school of choice.

And who, then, should pay for local roads and police?

The local households who use these, funded via equally apportioned direct property/pol taxes, less than $900 per household in Connecticut, or around $150 per person.   Everything gets covered, but funded Constitutionally, preserving property as “free and clear”, with the annual $150 a minor service charge, very much like a utility bill.

I decided not to pay property taxes in 2018, to experience the reaction of my town, the Town of Simsbury.  I found the manner the town coerces the tax – non-judicial tax sales – to certainly violate due process at its core, as it by-passes the courts all together, while also ignoring the 5th amendment’s narrow taking clause, which promises just compensation for eminent domain takes, with no other taking sanctioned.

Without judicial review, tax sales simply put your house up for a quick sale to cover back taxes, the owner left with little or nothing.  Raw taking, happening in many states!

Whose Town Is It?

My goal is to enlist town officials to correct their unlawful practices, to have them defend us, the homeowners – it’s their job! At heart, I am looking for legal protection by my town against the State of Connecticut’s unlawful home and automobile taxation practices, the same way the town’s police force protects me from physical crime.   After all, town corporations were created to serve the interests and protect the rights of local residents; not to be enforcers of unconstitutional state constructs.

In behalf of its citizens, the Town is obligated to take the Connecticut Governor to Federal Court … to force the State into funding both its K-to-12 and administrative code mandates without extorting households, and to pro-rate State-collected monies down to each town in an “equal protection” manner.

Upon judgement for the plaintiff citizens, the State of Connecticut would be ordered to rebalance its revenue sources, forgoing home taxation and instead boosting legislatively approved sales and income taxes, taxes that stand up to real representative, voter scrutiny.  This precedent would then carry to the other states.

Should the Town of Simsbury decide not to challenge the state and instead persist with illegal tax practices, local officials perpetrating Constitutional fraud against their own residents may be criminally charged with abuse of power and institutional racketeering.  Citizens would need to start a Federal class action suit against both the municipal and state co-conspirators.  Many would join.

Until 2019, property owners had to go through State Courts, (that generally protect the State). In summarizing the Rose Mary Knick case, Chief Justice Roberts wrote:

“We now conclude that the state litigation requirement imposes an unjustifiable burden on a property owner’s claim that his or her land has been effectively taken for public benefit without the government paying just compensation.”

Property owners are entitled to adjudication in Federal Court if they can prove constitutional rights have been violated.

Our Law of the Land

The U.S. Constitution’s intent to protect absolute rights for property stands a centerpiece to America’s founding, and neither popular voting nor government legislation can authorize wealth taking from one’s home, bank account, investment portfolio, or any other asset.  To go after property, socialist need to retire the United States itself, and post a new constitution.

And yes, as in the Old South, modern municipalities have built entire economic systems around the home enslavement practice.  Though one can advocate for liberal social programs, if to pay for these you directly interfere in the lives and properties of citizens, then you cross the line into de facto socialism—a form of enslavement.

But an engrained, now metastasizing home taxation cancer habit does not make it acceptable. As with full slavery, it is again time to stand for natural rights. The Supreme Court needs to strike down taxation of private property and put American liberty back on the map.

A line would be drawn.  In the American system, personal homes and financial properties are both off limits to government encumbrance.  Life, liberty and property would be re-affirmed as inalienable natural rights unable to be subjugated by any operation of government.

“Free and clear” property, the ultimate battle ground.  Your input protecting American liberty through this strategy will be appreciated.  Please reach out.